One of the reasons we love to teach the “Art Masters” with Artful Kids Club, is because often, these historic persons lived at defining moments of world history.  Their art gives us a visual window into a significant time and place.  Additionally, the artist’s biography provides clues as to how such brilliant achievements in the arts were possible.   What difficulties did the artist have to overcome?  What unique contributions did the artist make to society?

Kids can create their own version of a Henry Ossawa Tanner with the April 2022 edition of Masterpiece Monthly!  Click here to subscribe and unlock this lesson plus so much more!

Born into the Civil War and Reconstruction Era

Henry Ossawa Tanner was born in 1859, just prior to the era of United States History called Reconstruction.  This was a relatively short period following the American Civil War (1861-1865), a time when many formerly enslaved Africans quickly built institutions, engaged with politics and government, and took every modicum of opportunity to better themselves.

Henry’s parents were an example of this pattern.  His mother, Sarah Miller Tanner survived the evils of enslavement from birth, and while still a preteen, escaped North to Pittsburg through the Underground Railroad.  Once in Pittsburg, Sarah and her other siblings were assigned to families who cared for them.

Henry’s father Benjamin Tucker Tanner was born into a working class family.  The two met at Avery College, a training school for black youth.  Benjamin and Sarah had 9 children, two of whom reached international fame (Henry’s sister Halle became one of the first Black female physicians in the nation). While Sarah Tanner opened doors of opportunity for many Black youth as a school teacher, Benjamin became a founding clergyman of the AME Church, a Biblical scholar, and editor of the largest Black-owned periodical in the nation.

The Tanner family legacy is astounding, for they continued to make groundbreaking achievements throughout their generations. Yet the family was intimately acquainted with the pain of injustice.  Such a profound range of human experience must have infused Henry’s upbringing with a rare mix of compassion and courage.  Even Henry’s middle name Ossawa, is a gesture of this. It is a reference to Osawatomie, Kansas, the site of a battle between pro-slavery partisans and forces led by white abolitionist John Brown.  Remembering the struggles of the past, the Tanner family pushed on to pave a better future for everyone.

“Through painting, I preach”

Henry was at first encouraged to enter the ministry like his father before him.  But he knew from an early age that his gift was to be an artist.   Still, as his career in art unfolded, Henry’s spiritual roots showed through.  His most famous paintings feature Biblical subjects, and he is recognized for bringing a distinct contribution to religious art.  His impressionist/realist style highlights both the humanity and mystery of the subject matter.  He is famous for this quote:  “I will preach with my brush.”

An Expatriate in Paris:

In his early 20’s Henry Ossawa Tanner attended the Pennsylvania Academy of Fine Arts.  He was the only African American among the 500 students at this prestigious school, and he quickly distinguished himself, finding favor with painter/instructor Thomas Eakins.

Eventually, Tanner was able to travel to Europe and became enchanted with the creative, cosmopolitan culture of Paris.  He decided to spend the remainder of his life in France, where he was received with much acclaim, and was able to pursue art without the constant tensions of racial discrimination he would face in the United States.

A symbol of Hope and Honor:

Henry Ossawa Tanner eventually attained recognition on both sides of the Atlantic.  In 1908, he held a one-man exhibition at the American Art Galleries in New York.   In 1923 he was knighted by the Order of the Legion of Honor, France’s highest honor given to a civilian. Just a few years later, he became the first African American distinguished as a full academician of the U.S. National Academy of Design.  His work such as The Grateful Poor and The Banjo Player, helped to challenge harmful stereotypes of people of color in American Art. Throughout his career, Henry used his superb artistic skill to convey the dignity of all people.

Kids can create their own version of a Henry Ossawa Tanner with the April 2022 edition of Masterpiece Monthly!  Click here to subscribe and unlock this lesson plus so much more! 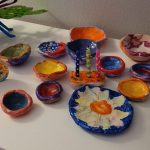 Next story :Artisan in Schools Profile:

Love. Diligence. Grace. Growth. Behind the scenes at AKC.

Every so often in my role as an Arts Education Specialist, I come across a school that “wows” me. A school filled with vivacity and intelligence.

Try some inspired homeschool art projects to liven up your week.

We've got several resources for you, in addition to ongoing article series!